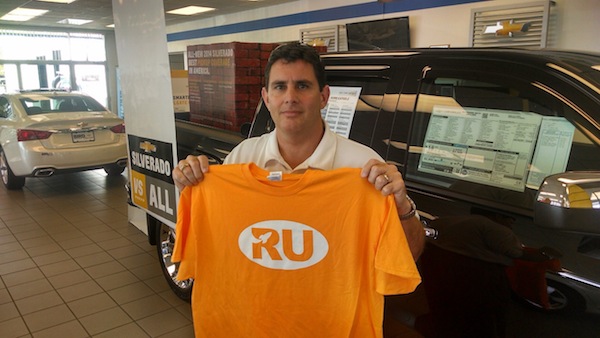 Working on RU, whether it’s website creation, the RU Magazine, planning the Community Connections meetings or creating a volunteer center, is fantastically rewarding. On a daily basis something happens that makes us take pause, give thanks to our community and be proud to be a small part of it.

Today is no different, yet the stakes in the following story are much higher.

Recently we heard from a single mother we know. For the sake of this article I’ll call her Tara. Tara came to us looking to share her story and potentially problem solve her situation.

Her current obstacle was a rusted out gas tank in her car. Every time she went to fill up her car, half of the gasoline would end up running down the outside of the tank. But the rusted gas tank was just the most current obstacle. There were many more systematic obstacles that Tara has been battling her entire life.

Lack of emotional security growing up as a child in her family. Intense emotional and physical abuse in her early relationship. As you can imagine, this lead to depressive states which lead to difficulty holding a job, which lead to financial difficulties which came around in a viscous circle and compounded her depression. The cycle was spinning and Tara and her son were just barely hanging on.

Through all this, however, Tara continued to strive towards a better future. She continued to educate herself. She sought and received therapy to battle the emotional juggernaut that was her past. She focused on her relationship with her son. Through it all, her best attribute was her tenacity; her will power to never give up even under daunting pressure and against the odds. She understood her cycle of depression, her strengths and her weaknesses.

She would be too humble to accept what I’m about to say, but she’s been an inspiration to those who know her. Her story is truly one of perseverance and courage.

Recently Tara became involved with the Circles Initiative. It still warms my heart to remember her excitement when she called to tell me she had been accepted. She realized Circles could offer her a fresh start and the tools necessary to stop her world spinning out of her control. She’s attends faithfully.

Her excitement for being accepted into Circles was bettered only by the next source of good news; a new job offer. Not only did the job offer a good living, but it was also rewarding work. Good hours, good pay. Tara felt in control of her life for the first time in a long time.

So as she pulled in to the gas station one morning she felt like she was on top of the world. She had hope, which had been missing for some time. She had a community in Circles who was not only helping her achieve success, but was allowing her to help others. She got out of her car, grabbed the gas nozzle and began filling her tank.

As the gas leaked out onto the ground and formed a puddle at her feet, the self doubt blasted back in to her life. Was all her hard work just a wasted effort? Her world began spinning again.

Fortunately, she was able to get enough gas into her car and drove to Bird Chevrolet. After a quick diagnosis they determined the problem, the aforementioned rusted out gas tank. The entire gas tank would need to be removed, a new one purchased and installed.

Tara was devastated. She didn’t have enough money to fill her gas tank, let alone replace it. She quickly began problem solving. She could get a used part to reduce the cost. She could get a friend to fix it, saving money but increasing other risk factors. She could cobble together a home remedy to get her through the winter (using a garden hose taped to the end of a gas can was discussed).

She had a job opportunity and she needed transportation. She was determined to make this work.

When we first heard from Tara we knew she should be included in a RU Giving story. RU Giving is our program where we pick a cause on Monday and with community support solve the problem by Friday. Tara’s story was a perfect candidate.

At first we thought we would try to raise money through individual donors in the community. But then we realized fundraising might complicate things and what we actually needed was a much more direct approach. We know that local businesses want to give back to our community. We hear it all the time. So we figured we’d simply call up Bird Chevrolet and make the ask if they would be able to order and install the gas tank for Tara, free of charge.

We called and asked Chris Muir at Bird Chevrolet. He didn’t even hesitate. He ordered a new tank and said they would have it installed. Done deal.

This success story is much more than simply installing a new gas tank. What Chris and Bird Chevrolet gave Tara was a reclaimation of hope when hope was a literally a puddle at her feet. At the exact moment when the vicious circle was restarting and feelings of “here we go again” were filling her mind, the community lent it’s talents to bring resolution to her troubles.

With a new tank, stable transportation and continued motivation, Tara and her son are well on her way to a better tomorrow. The appreciation Tara feels, expressed through her words and tears of joy, is something I’ve been thinking a lot about over the course of this week. It’s been inspiring to watch hopelessness turn to surprise then to exuberance and then to intense appreciation. This is community at it’s best.